I made Thyme and Parmesan Oatcakes from Lorraine Pascale’s Bake and they were absolutely delicious and completely moreish. They had a gorgeous, subtle, cheesy flavour and the perfect proportion of crunch to chew. I will definitely be making these again! 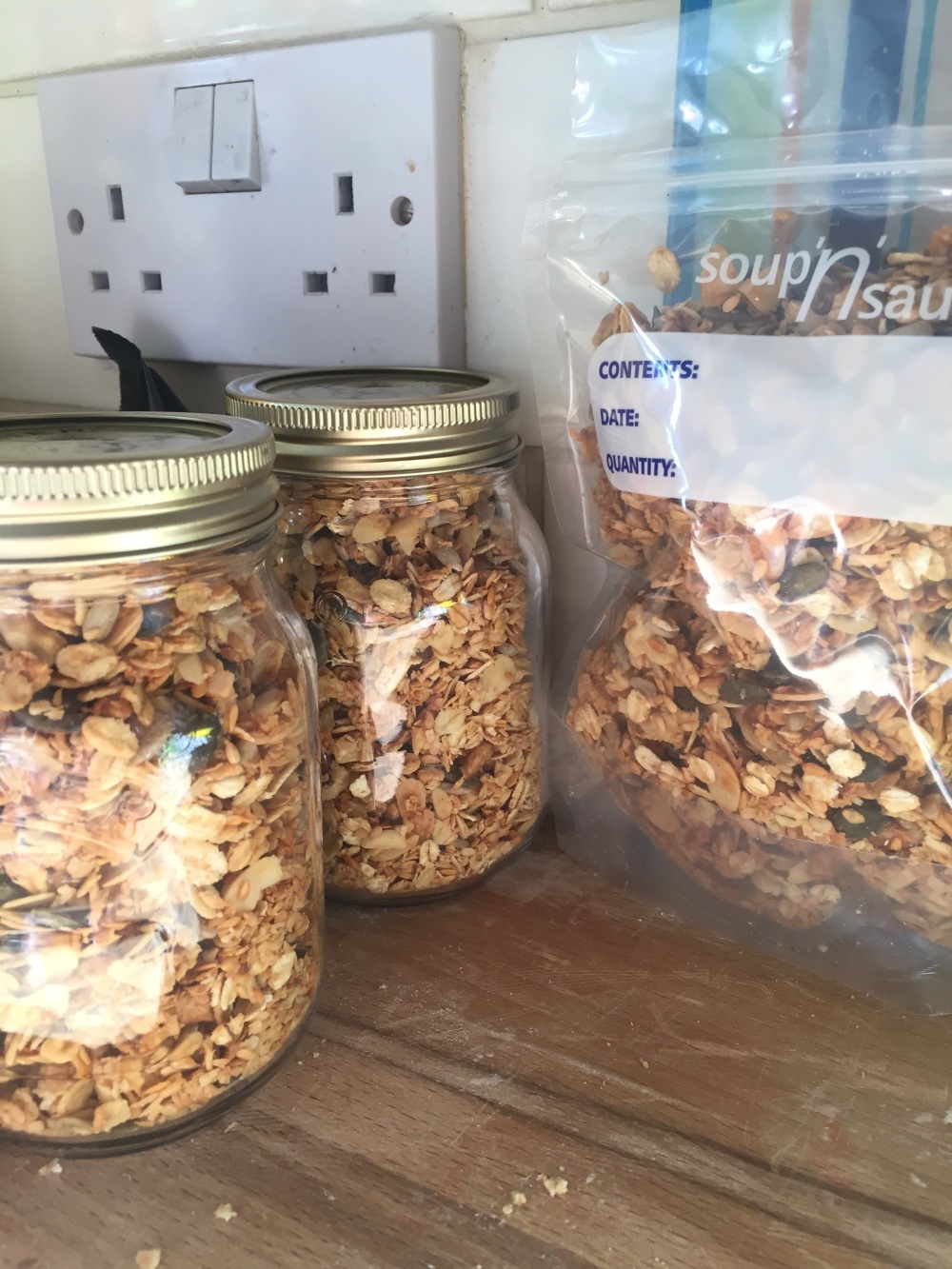 I am trying to eat more nuts, so granola is one way to do it, technically anyway, problem is, I’m not overly keen on granola, partly because of the aforementioned nuts and also because I tend to find both commercially bought granolas and homemade ones, to be either too sweet or too worthy and they usually have an ingredient or two I’m not keen on but the Olive Oil Granola from Thomasina Miers’ Home Cook looked different. It promised not to be too sweet, it had ingredients that passed my fussiness test (the nuts in this recipe are almonds and walnuts, which I am getting to like) and the addition of olive oil was interesting, as was the addition of salt. It smelt absolutely divine when making, particularly the grassy smell of the olive oil and it smelt even more heavenly when in the oven. The grassiness of the olive oil didn’t particularly make it through the cooking process but it does still add a certain something to the recipe, it’s just about the right level of sweet (it’s just got a small amount of brown sugar and maple syrup in) and that sweetness is balanced by a pleasant saltiness. I was particularly surprised at how much I liked the saltiness of the recipe, I tend to avoid adding salt when cooking, even when a recipe calls for it but Miers was convincing enough for me to follow the recipe to the letter and yes, that salt hit (and it’s not that much salt) is definitely worth it.

Of one note though, if you’re following the recipe, the full amount of ingredients listed must make a hell of a lot of granola, I had halved the ingredients, thinking I’d just make a jar full, to try it out first but (to demonstrate how rubbish I am at judging volumes) even reducing the amount of ingredients by half, still makes two jars and an emergency soup bag’s worth.

My favourite bread when visiting the bakers is poppy seed bloomers, they seem a little difficult to find these days though and when I do they’re either a bit overdone or the actual bread isn’t that nice, so I’ve been wanting to make my own poppy seed bloomers for a long time. I bought the Gail’s Artisan Bakery book, pretty much for that reason, well that and the fact that Gail’s is my favourite bakery chain (although I’ve never seen poppy seed bread for sale in their stores) but I bought the book a few years back, when making bread with anything more complicated than a quick bit of instant yeast seemed way too complicated and off putting, so I never made the bread. This recipe uses fresh yeast and requires you to make a poolish first (a sort of starter, made the day before, with flour and yeast) but now that I’m more in to making my bread, the recipe didn’t seem quite so daunting, so I gave it a go and I am so glad that I did. The result is just like the poppy seed bloomers I remember from my childhood, soft but with a lovely crust and you can’t beat poppy seeds. The recipe makes two loaves and had wondered whether I should have reduced it by half and just made one loaf but I needn’t have worried, as the bread was very quickly devoured by the entire family.

I thought that I’d give Vampiro juice from Thomasina Miers’ Home Cook, a go. It’s carrot, apple, beetroot, lime juice and a lot of ginger. I don’t have a juicer, so I used my blender but it turns out that my blender isn’t actually that good and the only way I could get it to remotely blend together was with the addition of quite a lot of apple juice. The result was still nice, although there was more than I had planned of it, as the apple juice really increased the volume. It is extremely gingery, so probably good if you’ve got a cold, any cold virus would pack its bags and leave faced with a drink that gingery.

I’m not sure if I’ll make this again or any of the other juices in the book whilst I just have my blender, as they’re clearly not going to work very well. I like the idea of drinking things like this more regularly though, I’m not tempted into getting a juicer, I had one years and years ago, a wedding present (in fact, if I remember correctly, we were given two juicers) and I remember it being a right pain in the neck to clean. Also, with juicing, you’re missing out on all the good stuff aren’t you? Yes, obviously you’ve still got nutrients in the actual juice but by not drinking the pulp, you’re missing out on all that fibre. A nutribullet is tempting, with my kids especially, they’d drink their body weights in smoothies if I let them, my blender is okay for smoothies with soft fruits but sneaking some veg into them would be good! 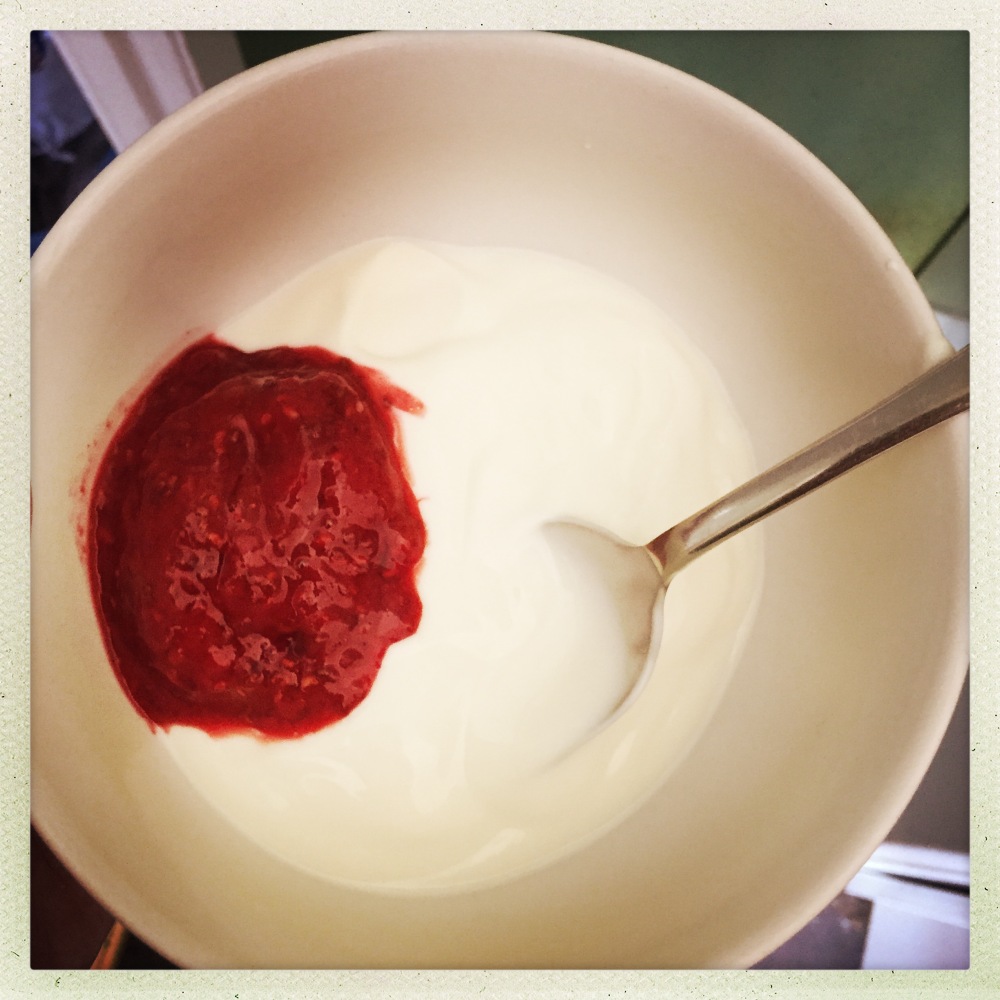 This (and the featured photo above) is raw jam, from The Midlife Kitchen book, it’s just some frozen fruit (frozen, as it’s what I had, plus it’s cheaper), in this case raspberries, chia seeds and a bit of lemon juice and maple syrup. It’s okay, it’s more like compote than jam really but that’s doubly okay as I prefer compote over jam. I just thought I’d make some as I thought it would make a nice accompaniment to yoghurt and the granola.

And finally some more poppy seed bread, this time made with the basic bread recipe from Gennaro Contaldo’s Italian Bakery book (I added the poppy seeds). This was nice, compared to a lot of bread recipes I’ve made recently, it was quick to make, I decided I wanted homemade bread for tea, at about 2pm in the afternoon and it was ready in plenty of time for tea at 5.30pm but if I’m going to be a complete bread nerd, you can tell the difference between this loaf and the poppy seed loaf I made earlier this week and it was the loaf which took a lot longer to make that definitely paid off in taste I think. Still, both were nice and as you never quite know when the urge to have homemade bread will hit, having a quicker recipe to hand is definitely a winner. 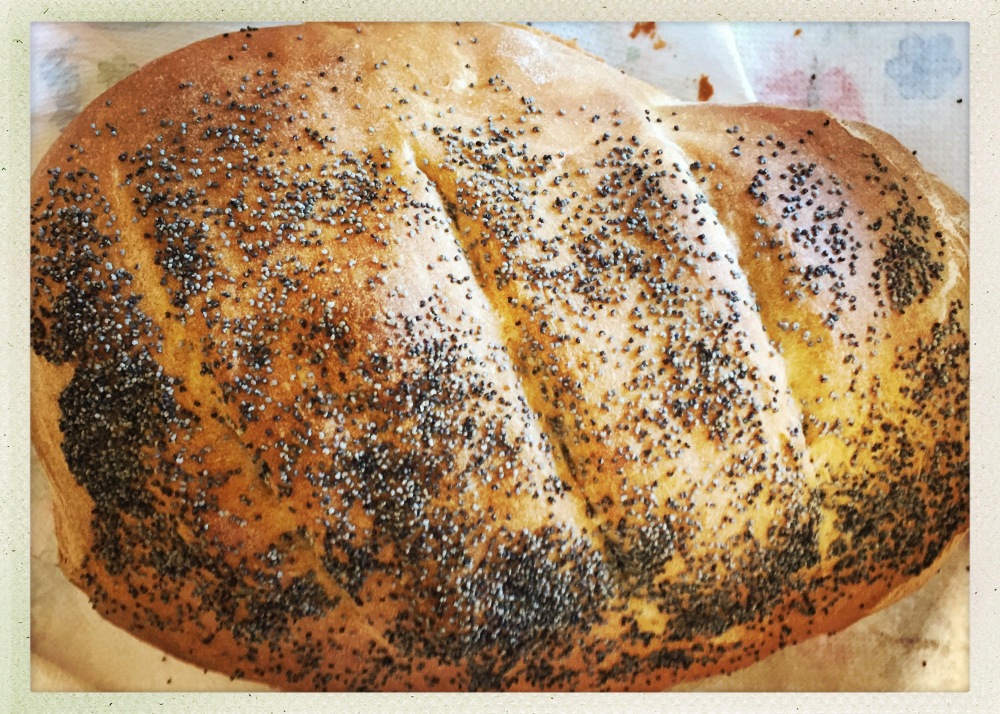