I read (and/or listened to) 72 books this year, not wanting to sound too big for my boots or anything but I easily passed my Goodreads goal of 50 books. I remember when, a few years ago, I used to aim for 50 books and got nowhere near, I was a 30 odd maybe low 40s on a good year, reader but since 2015 I’ve read, respectively, 88, 54 and now 72 books. However, since 2015, I’ve had a lot of sitting (or laying) around recovering from surgeries and I think the increase in the number of books I’ve got through, has been purely down to that. Hopefully, fingers crossed, touch wood, etc. etc., I’ll have no surgery next year, so it will be interesting to see what my reading figures look like then (however, I’m still planning on setting my Goodreads goal to 75 in 2018). 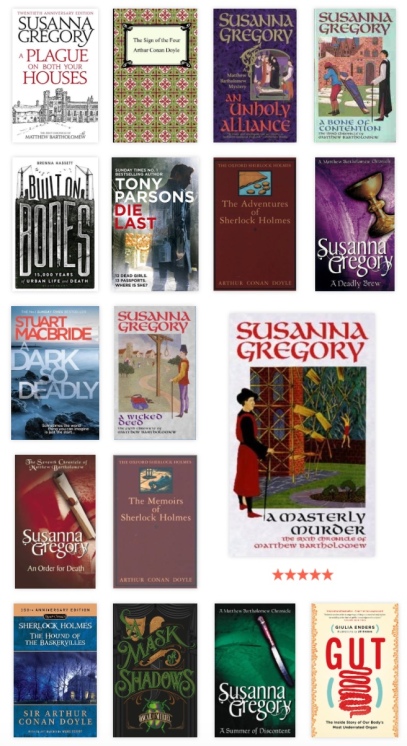 One of the things that have helped me read a lot of books this year, is that I’ve been working my way through some often lengthy series. I always love finding a series which I enjoy, particularly if it’s an old series, so there are lots of books I can catch up on all in one go. I love how easy reading a series like that, makes getting into the next book a breeze, because you already know the characters.

So, I have spent a lot of time this year reading and listening to Susanna Gregory’s Matthew Bartholomew series, which is about a 14th century doctor in Cambridge, who investigates crimes with his sidekick Michael, the university proctor (although Michael would say Matthew is his sidekick). There are currently 23 books in the Matthew Bartholomew series and some are obviously better than others, most are set in Cambridge and these are pretty much always reliably good but some are set elsewhere and my heart always used to sink a bit when I got to one of those, because they were never as good because I think Cambridge itself, was to me, as much a loved character as Matthew, Michael, Cynric and the rest of the staff of Michaelhouse. However, I did find the book set in York, Mystery in the Minster, to be really good but that was in part, I think, because I used to live in York as a student, so it was lovely seeing the town in a more ancient setting. I am currently ‘reading’ book 19, I say ‘reading’ because I haven’t looked at in ages, you see the majority of the Matthew Bartholomew books have been narrated by David Thorpe (who is really good), I think there was a big anniversary for the series this year, so a lot of the books got new covers and Thorpe did the recordings, however, a few of the books were recorded as audiobooks years ago, by a different narrator, so when I get to those books, I don’t bother getting the audiobooks and just read instead, because no way am I listening to Bartholomew and Michael with different voices. Book 19, The Lost Abbot, is one such book, it also suffers in that it’s another book set outside Cambridge and so, without David Thorpe doing the legwork for me, that is, so that I can listen to it whilst doing something else, if the book gets a bit boring (which with this one, it has), I end up putting it down and going to read something else. I will pick up the series again though, hopefully soon, as I am fond of Bartholomew and Michael.

Another series I’ve listened to this year has been the complete Sherlock Holmes, in the form of the excellent Sherlock Holmes: The Definitive Collection, read by Stephen Fry for Audible. The recording is very nearly 72 hours long and all for one Audible credit, so excellent value for money (and Fry really is a very good narrator). I had read a lot of the Sherlock Holmes before, over the years, but a lot of them I haven’t read since I was a teenager, so it was excellent catching up with them again and discovering a few of the later, less famous stories, I had not read before. I particularly loved rediscovering an old childhood favourite, in the final Holmes book, The Casebook of Sherlock Holmes, The Adventure of the Lion’s Mane.

Another series devoured this year was the Blake and Avery Mysteries by MJ Carter. There are currently three books in the series and although the first book, The Strangler Vine, starts off painfully slowly, it’s worth sticking with, if you like Victorian murder mystery adventures, because the stories soon pick up.

I’ve also finished working my way through Jon Ronson’s stuff too and I’m eagerly waiting for a new book from him, although from the sounds of what he’s up to at the moment (working on screenplays), I think that I’m going to have a long wait, however at least there was the excellent The Butterfly Effect to listen to, from Jon, this year.

I’ve also read and absolutely loved, the first two books in the Wayfarer series by Becky Chambers, this year and I’m eagerly waiting for the third, which is out next June. The Wayfarer series is exactly the sort of sci-fi I like, where it’s a sci-fi setting but there are not pages and pages and pages of minute detail world building and not much else. To me, the characters are the most important thing and yes, I love ‘seeing’ whole new worlds appear on the page but if the characters walking around in it are cardboard, it’s not going to interest me. Chambers creates wonderful characters and I can’t wait to see what they’ll do next, as opposed to another sci-fi series I’ve been reading this year 👇

I am currently going rather painfully through The Three Body Problem trilogy, I’ve read books 1 and 2, although I nearly gave up on book 2 in disgust because it is horribly sexist and although the writing is not good, I’m so fascinated by the premise (what would humanity do if it knew it was going to be invaded by aliens in 450 years time?), I still somehow keep reading. I’m currently about a quarter of the way through book 3 but it’s another book I’ve put down for a while, tempted by other stuff instead, you know, with actual characters and minimal sexism. 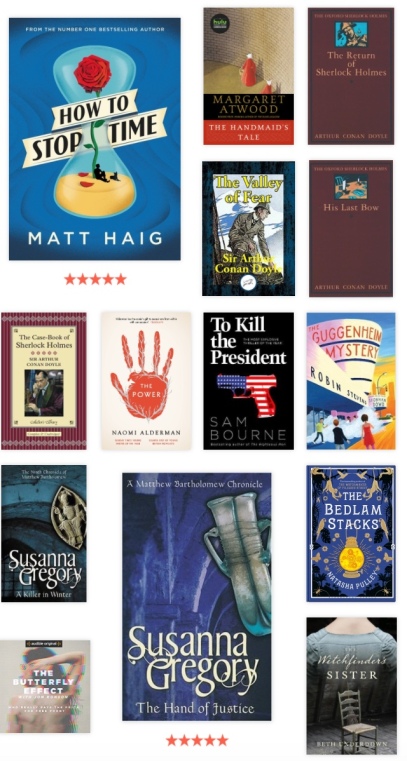 New to me, authors this year, included Syd Moore’s Strange Magic series, which, although not brilliant, (it suffers a bit from characters standing around info-dumping but it’s interesting info-dumping about witches and the mistreatment of women, so I don’t mind too much), I’ve already bought the second book to read, Margaret Atwood (how could I not have read any of her stuff before?) and Vivian Shaw’s Strange Practice, which looks to be a promising start to a series about a doctor who treats London’s supernatural. 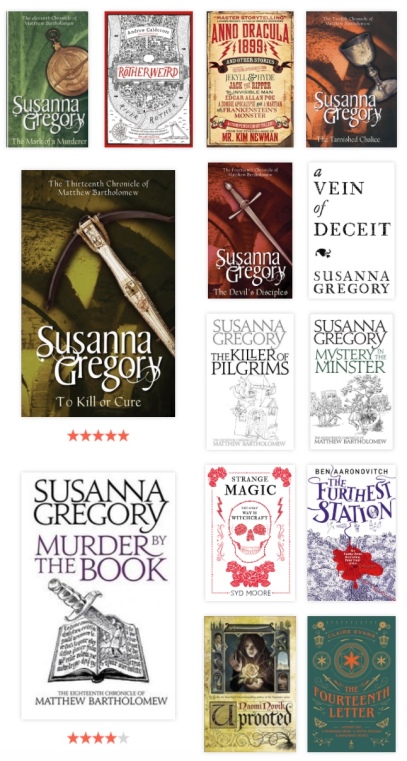 I’ve gone through phases with my reading this year; thrillers (Sarah Pinborough was particularly good reading for that, this year), non-fiction (excuse me whilst I fangirl over Jon Ronson some more), lots of historical fiction (thanks mainly to Susanna Gregory but also Oscar de Muriel, the brilliant Natasha Pulley and Beth Underdown), fantasy, which crossed over with my historical fiction a bit (such as the aforementioned Pulley, with her brilliant The Bedlam Stacks) or was more straight forward fantasy (such as Naomi Novak’s Uprooted), I’ve also, as the year has ended, got quite into spooky stories. 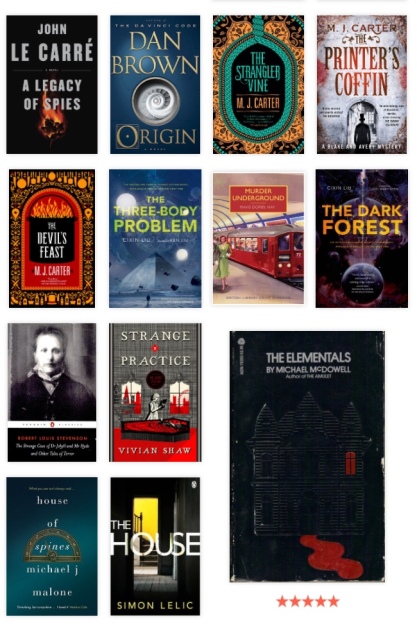 My standout books of the year have to be The Hand of Justice and To Kill or Cure, my two favourite Bartholomew books I’ve read so far, the former about a cult around a fake relic and the latter about a charlatan healer coming to Cambridge, The Long Way to a Small Angry Planet, the first Wayfarer book, about a wormhole tunnelling ship travelling to a distant planet,  13 Minutes, which is a brilliant YA crime story by Sarah Pinborough, How to Stop Time by Matt Haig, which is completely and utterly achingly beautiful and The Bedlam Stacks by Natasha Pulley, a sort of prequel (well it features one of the same characters) to the amazing Watchmaker of Filigree Street and it tells the story of a quinine smuggler forming a magical, unlikely friendship in Peru.

Books that I wish I hadn’t read ….. possibly The Three Body Problem trilogy, if the ending turns out to be rubbish (please no spoilers), Rotherweird by Andrew Caldecott, which potentially looked like the perfect book for me, about a fantastical town separate from the rest of England but for me at least, it just didn’t work, the latest Dan Brown, well, the travel stuff in it, as always, was good and some of the stories in Anno Dracula 1899 by Kim Newman were a bit hmmmm.

As I go into 2018, I’m currently still in a spooky story frame of mind, I have a mammoth pile of books to read (thanks to Christmas, my to be read pile is now two piles) and as well as some more spooky stories, I also have some literally weighty non-fiction and lots of fantasy. Happy reading everybody!